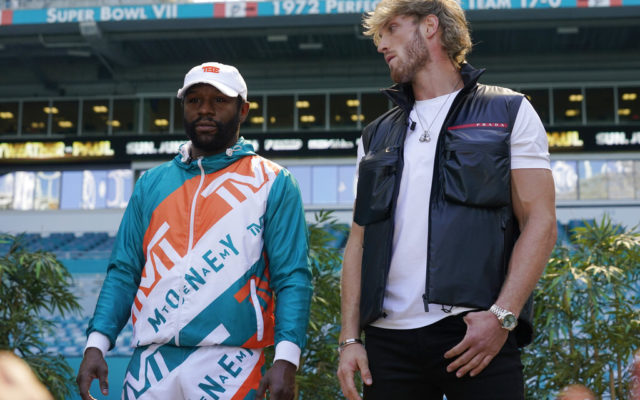 Boxers Floyd Mayweather, left, and Logan Paul stand during a news conference Thursday, May 6, 2021, in Miami Gardens, Fla. Mayweather and Paul are scheduled to face off in an exhibition bout June 6. (AP Photo/Marta Lavandier)

Mayweather Says He Won’t Knock Logan Paul Out In The First Round For ‘Entertainment’ Purposes Floyd Mayweather will step into the ring with YouTube star Logan Paul this weekend – and he promises it won’t be a first-round knockout. The former champ pretty much gave the game away, saying “If I want I could knock him out in the first round”, but that “we want to give the people entertainment.” Many people suspected that Floyd was dogging it for the first few rounds of his 2017 fight with Conor McGregor, which lasted 10 rounds before Mayweather won by TKO. Mayweather-Paul will go down Sunday night in Miami on pay-per-view. Do you plan on watching this fight?  Is there any point in watching if Floyd could easily end it in the first round?