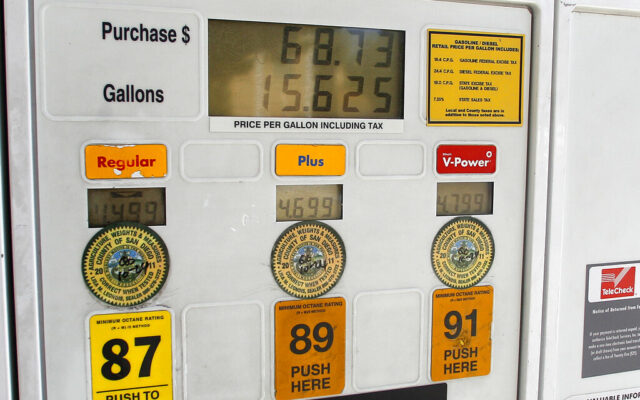 In this Feb. 21, 2012 photo, the pump at a Shell Oil gas station shows a purchase of more than $68.73 for 15.6 gallons of gas prices in Del Mar, Calif. Americans have pumped less gas every week for the past year. It's a slide that's now longer than the decline seen during the recession. Soaring pump prices have forced people to drive less and buy more efficient cars. (AP Photo/Lenny Ignelzi)

U.S. Average Gas Price Below $4 There’s a little bit of relief at the gas pump. According to gas price checker GasBuddy, the national average per gallon has dropped below $4. As of Tuesday morning, the average dropped to $3.99, down from June’s record-high average of $5.03 a gallon. Still, the drop may be temporary. “While the recent drop in gas prices has been most welcomed, the issues that led to skyrocketing prices aren’t completely put to bed, and still could lead prices to eventually climb back up, should something unexpected develop,” said Patrick De Haan at Gas Buddy. Have you noticed lower gas prices in your area? How much does it cost you to fill up a tank?