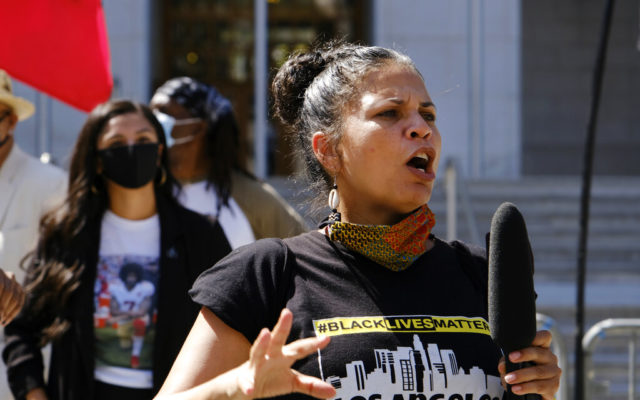 FILE - In this Aug. 5, 2020 file photo, Melina Abdullah speaks during a Black Lives Matter protest at the Hall of Justice in downtown Los Angeles. Los Angeles police are investigating a possible hoax call that led to the department's SWAT team responding on the block of one of the city's leading Black Lives Matter activists. Abdullah, co-founder of BLM-LA, streamed live video on Instagram, showing armed officers outside her house. The video showed officers screaming orders at her when she came outside. Nobody was hurt. (AP Photo/Richard Vogel, File)

Study: Police Officers Show Less Respect to Black Drivers A new study has revealed what most of us already know: Police officers tend to show less respect to Black drivers than they do to White people. Researchers with the American Psychological Association analyzed body cam footage from more than 100 police officers and determined police officers speak to Black motorists — particularly, Black men — in a harsher tone of voice than when they speak to White men. “We were analyzing this footage both to identify challenges with police-community relations and to try to offer some suggestions,” says lead author Nicholas Camp. Surprisingly, one former police lieutenant — Diane Goldstein, who’s now the executive director of Law Enforcement Action Partnership — says U.S. police departments should take a serious look at the study’s findings. “It’s really important to have this very difficult conversation around the issue of race,” Goldstein says. “I know it makes law enforcement uncomfortable, but if we don’t squarely face it, we are not going to be able to transform police in the fashion that we should and we aren’t going to be able to protect our communities.” Have you ever been mistreated by a cop? Did the protests surrounding George Floyd’s death change the way police officers behave?