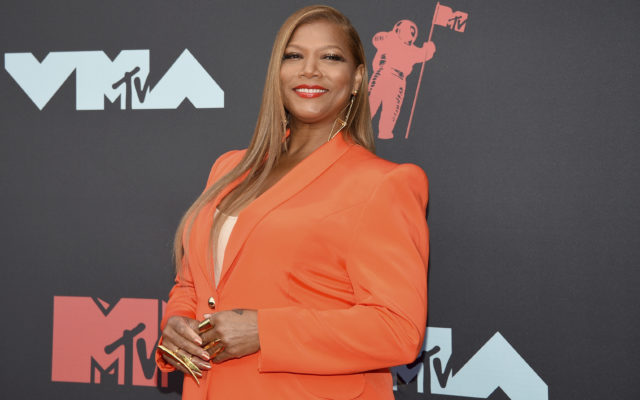 Queen Latifah arrives at the MTV Video Music Awards at the Prudential Center on Monday, Aug. 26, 2019, in Newark, N.J. (Photo by Evan Agostini/Invision/AP)

Queen Latifah Thanks Rap Peers, Family, Shouts Out Pride Month While Accepting Lifetime Achievement Award Queen Latifah was honored with a Lifetime Achievement Award during Sunday evening’s BET Awards. The actress, rapper, and singer started her career in 1989 with her debut album, “Ladies First.” Before accepting her award, Lil Kim, Rapody, MC Lyte, and Monie Love, who appeared on the 1989 track with Latifah, performed “Ladies First,” and “U.N.I.T.Y” Afterward, Queen Latifah took to the podium with a picture of her late mother in her hand and her father by her side, she thanked BET for allowing a “platform for beautiful Blackness to thrive, to shine.” She also thanked her family saying, “I’ve always celebrated the woman because I was raised by a strong, Black woman and raised by a father who loves women. We can’t live without each other.” Latifah thanked her longtime business partner, Shakim Compere, and her “loves” presumingly her rumored girlfriend, Eboni Nichols, and son, Rebel. Latifah ended her speech by wishing everyone a, “Happy Pride.” What has been your favorite Queen Latifah moment?