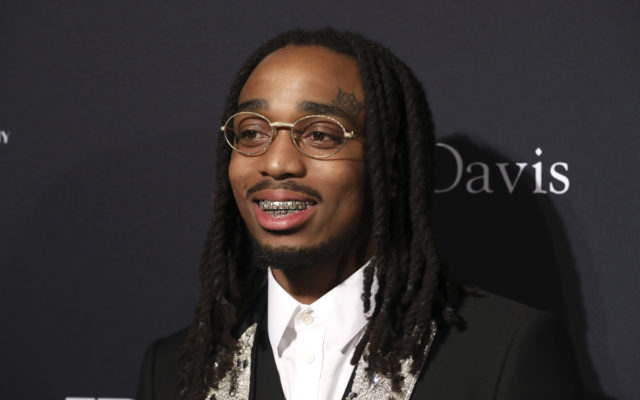 Quavo arrives at the Pre-Grammy Gala And Salute To Industry Icons at the Beverly Hilton Hotel on Saturday, Jan. 25, 2020, in Beverly Hills, Calif. (Photo by Mark Von Holden/Invision/AP)

Quavo Tells Drake To Pay Up After Georgia Bulldogs Win Championship Quavo and Drake had a wager on the line during last night’s Georgia/Alabama championship game.  Quavo posted a video to Instagram of him at Lucas Oil Field Stadium with the caption, “U kno why I’m here @champagnepapi,” he wrote. “We are locked in we are down.”  Drake responded confidently, “Just run me my bread right and nice and slow no sudden movements. #ROLLTIDEROLL.”  Unfortunately Drake would have to eat his words after Georgia beat out Bama 33-18, Quavo tried to call Drake after the victory, however Drake didn’t answer forcing Quavo to head back to social media with a video saying, “You ain’t answering the phone?” he said. “I need my chips with dip baby!” When The Shade Room reposted the Atlanta hitmaker’s video, he took to the comments section to say, “HE GONE PAY THO HE NOT YK OSIRIS.”  How much have you ever bet? Share your story.