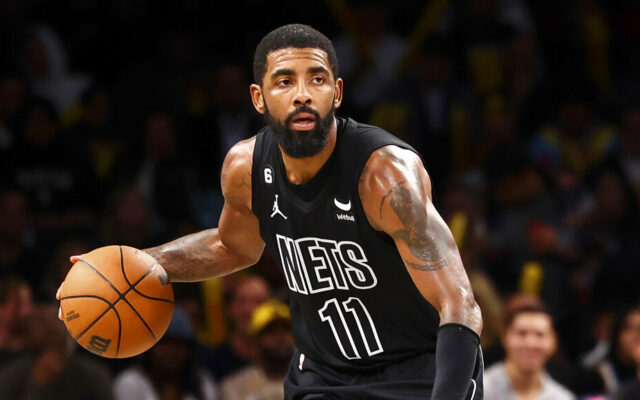 The Brooklyn Nets on Thursday suspended Kyrie Irving for at least five games because he hasn’t disavowed reports that he has antisemitic beliefs.

Breaking: The Nets have suspended Kyrie Irving without pay, the team announced.

The suspension will be for "no less than five games," the team said. pic.twitter.com/qCpVIc1yZC

"I'm a beacon of light. I'm not afraid of these mics, these cameras. Any label you put on me I'm able to dismiss because I study. I know the Oxford dictionary."

Kyrie Irving with a lengthy answer on the public reaction to his sharing of an anti-Semitic film on social media: pic.twitter.com/JgG9hOFQiU

The suspension, which will see Irving lose pay for five games, came just hours after the basketball star refused to issue an apology to NBA Commissioner Adam Silver for posting an link to an antisemitic film on his Twitter feed.

“I am disappointed that [Kyrie Irving] has not offered an unqualified apology and more specifically denounced the vile and harmful content contained in the film he chose to publicize.”

Did the Nets do the right thing? Or do you think Irving’s personal beliefs have nothing to do with his NBA career?