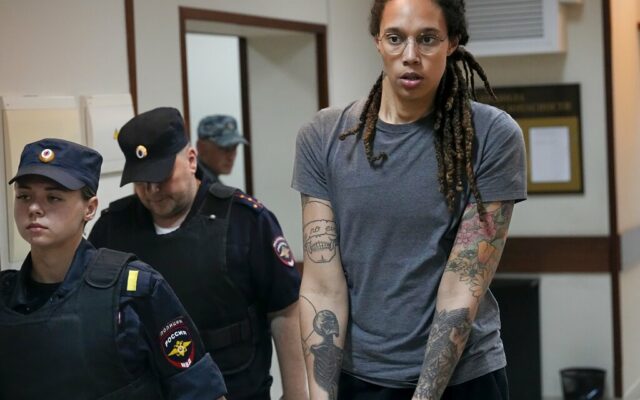 WNBA star and two-time Olympic gold medalist Brittney Griner is escorted from a court room ater a hearing, in Khimki just outside Moscow, Russia, Thursday, Aug. 4, 2022. A judge in Russia has convicted American basketball star Brittney Griner of drug possession and smuggling and sentenced her to nine years in prison. (AP Photo/Alexander Zemlianichenko)

WNBA Holds Moment Of Silence For Brittney Griner The WNBA held a special moment of silence for Brittney Griner on Thursday night, after the Phoenix Mercury star was sentenced to nine years in prison in a Russian court. Griner’s Mercury teammates and players from the Connecticut Sun met at halfcourt before the game and bowed their heads for 42 seconds – in honor of Griner’s jersey number. The Sun won the game 77-64. Should other sports be holding their own Griner tributes?