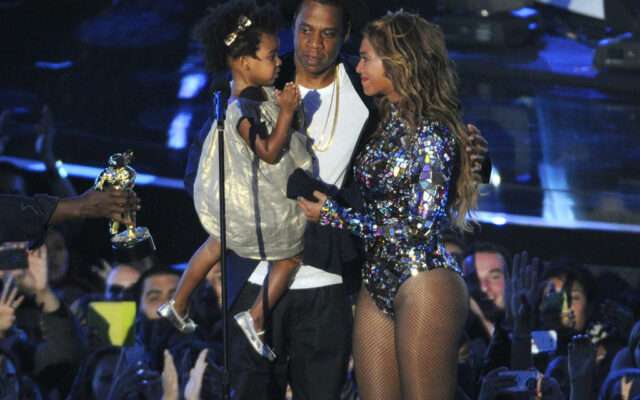 FILE - This Aug 24, 2014 file photo shows Beyonce on stage with Jay Z and their daughter Blue Ivy as she accepts the Video Vanguard Award at the MTV Video Music Awards in Inglewood, Calif. Beyonce announced on her Instagram account, Wednesday, Feb. 1, 2017, that she is expecting twins. (Photo by Chris Pizzello/Invision/AP, File)

Beyoncé & Jay-Z’s Daughter Blue Ivy Earns First Gold-Certified Singles Beyoncé featured Blue Ivy on tracks like “Blue” from her album Beyoncé and “Brown Skin Girl” from The Lion King: The Gift soundtrack as well. The Recording Industry Association of America recently issued gold certification for “Blue” and “Brown Skin Girl,” which also means two gold awards from the industry organization for Blue Ivy. At 10, Blue Ivy Carter is already a Grammy winner for Beyoncé’s “Brown Skin Girl” which won Best Music Video at the 63rd Annual Grammy Awards ceremony in 2021. Blue Ivy debuted on Jay-Z’s “Glory,” which was released two days after Blue Ivy’s birth, making her the youngest Billboard charting baby. What do you want your kids to accomplish at a young age? What have they already accomplished?