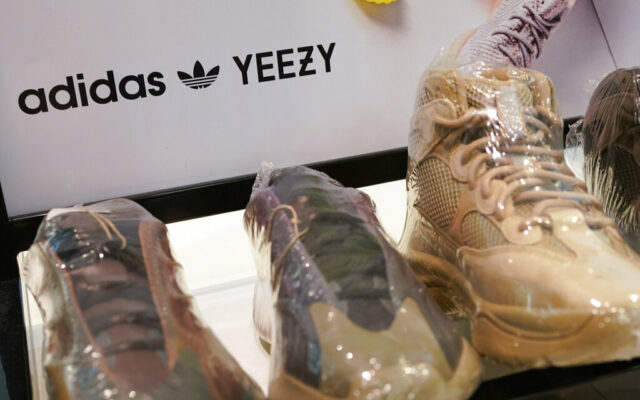 A sign advertises Yeezy shoes made by Adidas at Kickclusive, a sneaker resale store, in Paramus, N.J., Tuesday, Oct. 25, 2022. Adidas has ended its partnership with the rapper formerly known as Kanye West over his offensive and antisemitic remarks, the latest company to cut ties with Ye and a decision that the German sportswear company said would hit its bottom line. (AP Photo/Seth Wenig)

Good news, you’ll still be able to get Yeezys, but they will be named something different, according to Adidas.

Despite ending their relationship with Kanye West, Adidas will continue selling Yeezy sneakers and apparel but without the Yeezy branding and name as early as next year

The end of their partnership has cost Adidas $250M in profits and $500M in lost revenue pic.twitter.com/0VQFc26tF9

The German sportswear brand says they are the “sole owner” of certain colorways and designs that they plan on releasing next year. They have yet to share the new name of the shoes. Adidas stated that next year’s elimination of brand royalties and marketing expenses would reduce the breakup’s effects.

Despite worldwide economic woes, Adidas reported a third-quarter revenue increase of 11 percent to over five billion on Wednesday. Bjorn Gulden replaces Kasper Rorsted as CEO, who leaves the firm on November 11th.

Will you still purchase “Yeezys” if Kanye is no longer associated with the brand?