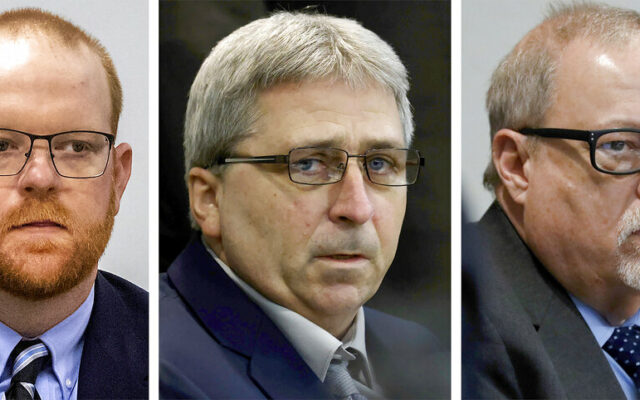 This photo combo shows, from left, Travis McMichael, William "Roddie" Bryan, and Gregory McMichael during their trial at at the Glynn County Courthouse in Brunswick, Ga. Jurors on Wednesday, Nov. 24, 2021 convicted the three white men charged in the death of Ahmaud Arbery, the Black man who was chased and fatally shot while running through their neighborhood in an attack that became part of the larger national reckoning on racial injustice. (Pool, file)

3 Men Convicted in Arbery’s Killing Found Guilty of Hate Crimes The three men convicted of murder in Ahmaud Arbery’s fatal shooting have been found guilty of federal hate crimes. In addition to the federal hate crime the father and son, Greg and Travis McMichael and their neighbor William ‘Roddie’ Bryan were found guilty of attempted kidnapping. The McMichael’s were also found guilty of the use of a firearm in the commission of a crime. The FBI uncovered old racist text messages and social media posts from the men. For example, in 2018 Travis McMichael wrote a comment under a Facebook video of a Black man playing a prank on a white person. Travis wrote, I’d kill that f— n—